‘A shift in consciousness is needed. At the core of our consciousness to care and have compassion for other beings and our sense of belonging to the one planet we have. A shift needed to take place in the heart, the mind and view of reality. By strengthening our compassion, we fuel our courage and determination.’

For many people, the idea of paradise often involves a proximity to the sublime natural habitats of our planet: beautiful golden beaches, luscious flora and crisp, crystal clear oceans. However, this idyllic image is in very real danger of becoming a ‘just a dream’ as single use plastics plagues beaches, oceans and habitats around the world.

For too long we have taken our planet for granted and assumed that its wonders are permanent and timeless. Plastic pollution, however, is leaving its scar on every region of the earth, from the tropical environs of the jungles to the inhospitable polar ice caps. The plastic we consume in our everyday lives finds its way across continents and oceans, contaminating our food chain, destroying ocean life and washing up on far away shores and damaging the livelihoods of communities who rely on tourists in search of the extraordinary beauty of our planet.

As Herberg’s words suggest, if we are all to benefit from the wonders of our planet, we need to remember that we have a responsibility to maintain it, ensuring that our plastic footprint doesn’t destroy the beauty and uniqueness of our environments.

Currently, according to the Plastic Oceans Trust, 90% of all debris found in the ocean is plastic in origin, with the most commonly found object being food wrappers and containers, followed closely by plastic bottles and plastic bags. Shockingly, only 9% of the world’s plastic is recycled, with approximately 80% of produced plastic ending up in landfill or in the environment. Every single piece of plastic that ends up in our environment comes with a shocking price – it can take 450 years for a single plastic bottle to degrade, 500 years for a plastic straw, and up to 1000 years for detergent bottles to decompose.

Throwing away plastic packaging and waste into the seas is not only a blight on some of the world’s most beautiful coastlines, it has a serious impact on the species that rely on the ocean as a habitat and a source of nutrition. Over the last 50 years, reports of whales becoming tangled in discarded fishing nets have become more frequent; the distressed creatures often find themselves in shallow waters and even beached causing slow and needless death.

It’s not just the creatures of the ocean that feel the impact of plastic pollution. For those who consume fish and seafood, it is highly likely that plastic enters the human food chain, as fish often eat the plastic in their environments. It is estimated that fish in the Pacific Ocean ingest up to 24,000 tons of plastic every year.

As tides and currents sweep plastic debris thousands of miles across our oceans, the visual impact often destroys beautiful coastlines and idyllic picture postcards of paradise. The result has a damaging effect on tourism and the economy of communities that rely heavily on visitors. As once-renowned beaches and coastlines become synonymous with litter and debris rather than golden sands, the appeal to tourists and international investors diminishes, in turn raising unemployment and economic deprivation, from which many rural communities can never recover.

To combat the explosion of plastic debris in oceans surrounding St Vincent and the Grenadines, communities are fighting back, setting up Action Bequia, a locally based initiative to recover and recycle plastics across Bequia and the region. The independently formed organisation has raised over $1.2 dollars from generous supporters and fundraisers to combat the negative impact of plastics.

Action Bequia have brought the Bequian community together to beautify areas of the island and ensure that local pride and tourist numbers remain high. The Bequian Bins campaign has dramatically increased the levels of recycling across the island and removed tons of plastic waste washing in from the ocean. Currently, Action Bequia has sent nearly half a million plastic and metal drinks containers for recycling instead of the island’s landfill.

The group has also improved local infrastructure in order to deal with global issues that can have a devastating impact on island communities, such as global warming and extreme weather, as well as restoring coastal walks and improving visitors’ experience. Their chosen slogan, ‘actions speak louder than words’, is truly evident on the island!

Taking Responsibility – What more can be done?

Thankfully, awareness of the plastic problem has spread quickly thanks to campaigners, from local activists such as Stina Herberg to international figures such as Sir David Attenborough, who have been vocal about the situation. Sir Attenborough’s words serve as food for thought: ‘I suppose, for me, the thing that is so galling about plastic pollution in particular is that it is so utterly unnecessary. The plastics in our oceans ought never to have got there in the first place – much of it perhaps ought not to have been manufactured at all. And yet, there it is, in unbelievable quantities, causing untold harm to marine wildlife.’ In the first instance, being aware of how much needless waste we produce and questioning the necesity of plastic in our lives can be a step in the right direction.

Politicans and governments the world over are taking action to stop the over production of single use plastics. The UK government has already banned the use of microbeads and will be followed by the Canadian and US governments. Currently, 16 countries have introduced a ‘plastic bag tax’ to discourage the use of single use bags which cause terrible environmental damage. 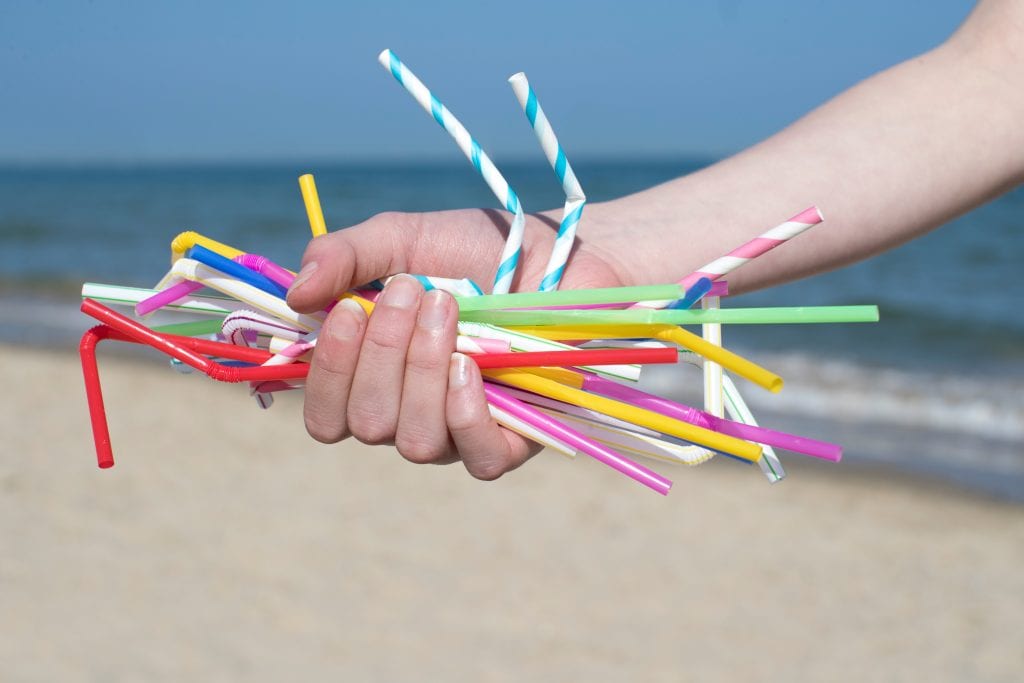 As individuals, we can make choices in our everyday lives that will have a positive impact on this matter. Reducing single use plastics such as bottles, plastic bags, straws, cups and utensils is an easy way to reduce the amount of plastics that end up in our oceans. Being aware of companies and business that promote single use plastics means we have a choice whether to take a stand against this global scourge or be part of the problem.

Particpating in beach clean ups gives you the chance to see the impact for yourself and do something positive to rid our environment of the damage before it destroys the lives of the creatures that live off the sea. Creating community spirit and pride in our environment is essential to stop the tide of plastic pollution and to show you care. It’s also instant and has a huge impact!

We live in a beautiful world, let’s make a conscious shift to love it and preserve it.

As soon as you set foot on any of the islands of St Vincent and the Grenadines it’s easy to see why people are so passionate about this paradise. Although equally unable to resist the allure of area, being of West Indian descent, I am drawn to exploring my family history and the places my father called home. I am passionate about the development of tourism and investment in SVG but driven by the desire to be sympathetic to the landscape and the people who live there, many of whom I count as friends. Having retired from a long career as an accountant in the City of London, I now have the time to commit to other interests, including film editing, genealogy and learning the Irish language (Gaeilge) – with varying degrees of success! One of my pursuits that I am most proud of is www.grenadinesinvestments.com, a website that showcases the best the islands of St Vincent and the Grenadines have to offer, from real estate to tourism, the economy to the international airport and, of course, some of the world’s most beautiful beaches. It’s a growing hub of information on the islands and a genuine labour of love for me. Finding new trade partners, investors and attracting tourists is the key to the Islands’ success and I hope that through my website and social media presence I am able to be a small part of these idyllic islands’ success story.

Price Starts from £150,000 Land for sale – Mount Pleasant These parcels of land in…
read more

“INDIGO HOUSE”, MOUNT PLEASANT Gorgeous views of Mustique and The Grenadines, together with a stunning…
read more